Jerusalem as an Ideal and as Current Reality

Jerusalem as an Ideal and as Current Reality 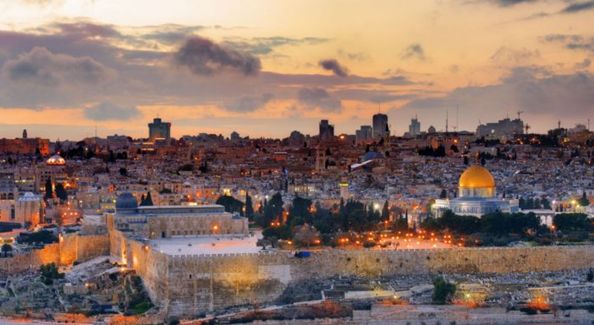 For over 2000 years, Jerusalem has been a source of inspiration in Western thought & culture. Full of Biblical allusions, William Blake‘s famous poem Jerusalem advanced a concept of England, a synonym for a particular vision of society, a return to a state of peace, harmony & moral goodness. Set to music, it became a kind of second national anthem, a hymn still sung in churches and on important national occasions.

“I will not cease from mental fight,

Nor shall my sword sleep in my hand

Til we have built Jerusalem

In England’s green and pleasant land”.

It is deeply embedded in public consciousness & pop culture. In 1973, Emerson, Lake & Palmer recorded a progressive rock version. The music was different, but the message the same; separated by 150 years, for Blake and for ELP, Jerusalem means righteousness, goodness, positive transformation, the ideal of goodness they aspired to for their beloved England.

On the other side of the Atlantic, in Carly Simon‘s song “Let the river run” invites to join a New Jerusalem:

Let all the dreamers

where Jerusalem means a new Promised Land of splendor and growth; an inheritance to be conquered with effort and work of the many, the chosen for this mission.

The Jewish people were the first to sing to Jerusalem, deep melancholic hymns full of desire to return to the City founded by King David. When the First Great Temple was been destroyed and the Children of Israel were forced into exile in Babylon, they wept for their Capital from the banks of the rivers of Babylonian Mesopotamia, composing the beautiful and well-known Psalm 137:

“By the rivers of Babylon we sat and wept

when we remembered Zion.

There on the poplars

we hung our harps,

for there our captors asked us for songs,

our tormentors demanded songs of joy;

they said, “Sing us one of the songs of Zion!”

How can we sing the songs of the Lord

while in a foreign land?

If I forget you, Jerusalem,

may my right hand forget its skill.

May my tongue cling to the roof of my mouth

if I do not remember you,

if I do not consider Jerusalem

For the Jewish People in those ancient times, Jerusalem was obviously not an abstract Utopian ideal, but a concrete aspiration that physically embodied the political, governmental, military, legislative, spiritual & religious capital of their national identity. The Jews were the People who mentioned Jerusalem in their Bible – 670 times! When the Psalm alludes to the crying of the Jews for their lost Capital, the meaning was not abstract; it called for practical action: they cried each day for the Jerusalem from which they had been expelled by force, for the Jerusalem that remained – even in their exile – the center of all their national life. It was a cry that demanded action for their physical return to the vision of a rebuilt Jerusalem. And indeed, just 50 years after that first destruction, that vision was progressively achieved.

In the 18 centuries that followed the destruction of the Second Temple in 70CE, and most decisively after the fall of Betar and the final defeat of Bar Kochvah’s revolt in 135CE, the Jewish People were expelled from their historic capital, but never absent. Time and again over these long centuries of dispersion and oppression, Jews returned to live in Jerusalem until finally, in the liberation from Jordanian occupation on June 7, 1967 – 28 Iyar 5727, the Jewish People regained the possibility to rebuild worldly, national, and spiritual Jerusalem, to honor its most sacred places in the restored Capital of a reborn State of Israel, founded on May 14, 1948 – 5 Iyar 5708.

In Western Civilization, .Jerusalem is connected to images, hopes, and utopian dreams. By contrast, for the Jewish People, in ancient times and today, Jerusalem and Zion are daily realities of national redemption. This persistent difference between the ideal Jerusalem and the real Jerusalem creates a gap marked by misunderstandings, and expectations & demands that range from the reasonable to the outrageous, perhaps why, possibly precisely why many in the West find it so difficult to comprehend, value and appreciate the actual reality of a Jewish People as a restored nation in a very real Jerusalem of stone, of light, of dedication, of immense joys and tremendous dilemmas. This very real Jerusalem encompasses ethnically different groups, intertwined religions, and overlapping histories, under the benign sovereignty of a People reunited with the joy of living, pouring their creative energies into rebuilding their national existence in our ancestral Land Zion, and in our Capital Jerusalem.

May we all celebrate our freedom to walk Jerusalem’s streets, enjoy her sights, sounds and aromas, bask in the extraordinary colors as the changing light of the day plays upon her stones, and may we all add yet more to her eternal majesty.

May we feel and carry with us the yearning emotion of hundreds of our generations who longed and prayed for her, but could only imagine and praise her in poems and songs. Today, let us carry their memory as we enter her gates and ascend to her glories…