The only possibility of perhaps grasping a little of the immensity of the devastation during the Shoah is to learn the story of one person who succumbed at the hands of the murderers, and then to multiply the story by many millions in our minds. In the State of Israel the whole Nation observes Yom HaShoah vehaG’vurah, commemorating the Shoah and of the multiple acts of heroism of thousands and thousands of Jews everywhere to resist the Nazi killing machinery.

Out of the many stories our Maccabi Movement is proud of during the dark, unprecedented years of the Shoah, this year, during Maccabi World Union commemoration of Holocaust Day, we will learn about the personal journey of Noah Klieger – a story of deep resilience and faith in a better future. Noah was born in 1925 in Strasbourg. His family relocated to Belgium in 1938. After the start of WWII, when Belgium fell under Nazi occupation, 13-year-old Noah helped found a Zionist youth underground organization. Members of his group passed messages between adult underground cells, helped obtain ration stamps, and smuggled Belgian Jews to Switzerland. Overall, Noah’s cell successfully smuggled some 270 Jews to this neutral country. However, when his own turn came to leave Belgium in 1942, he was caught at the border by the Germans.

Noah Klieger was interned for a period of time in the Mechelen transit camp and in January 1944 he was sent tohell-on Earth: the huge concentration and death camp, Auschwitz. There he contracted pneumonia. Expected to be put to death, Noah started showing his extraordinary strength: he personally addressed 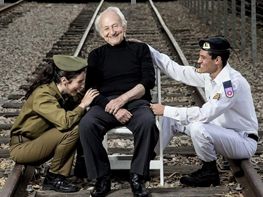 chief physician Mengele – the infamously famous murderer doctor – and succeeded in persuading him and the colleagues who were with Mengele that he still could be of use. One of the doctors agreed to send Noah back to barracks.

Later he was saved from extermination by an extraordinary stroke of luck: one of the SS officers running the camp turned out to be an avid boxing fan and decided to form a boxing team of Auschwitz prisoners. Despite having no previous boxing experience, 16-year-old Noah volunteered to join the team. Other team members who did have such experience in the pre-war world read his bluff… but helped him stay on the team, withholding their own hits and allowing him to hit them. Together with his teammates Noah was fed better than other prisoners and sometimes even received soup from the officers’ mess. They were also exempt from work in the afternoon hours so that they could train. In all other respects, they were treated no better than other prisoners and sometimes even harsher, to show them that their athlete status did not carry privileges. In Auschwitz, Noah started his sport carrer… as a means to save his own life.

When the Red Army started closing on Auschwitz in January 1945, the remaining prisoners, including Noah, were transferred on foot to Germany. After a three-day long death march[1], the survivors were sent to the Mittelbau-Dora concentration camp. Noah had survived that new death-stage too… There he succeeded in fooling the Germans for the second time by pretending to be a precision mechanics expert and was sent to the underground plant producing missiles. On April 4 he was once again sent by foot with the rest of the prisoners to another concentration camp, this time Ravensbruck. This death march took 10 days, but on April 29 Noah and other Ravensbruck prisoners were freed by the Red Army.

Noah started building a new life, after surviving the Shoah. He was a positive man, with a real hope for a future of national Jewish redemption. Noah started then a career as a journalist, covering Nazi criminal trials in Belgium, France, and Germany. He was much luckier than most survivors: in Belgium he reunited with his parents, who also survived Auschwitz…

When Noah learned about Aliyah Bet – an illegal immigration operation allowing European Jews to come to the Mandatory Palestine, where the future State of Israel would be established, he joined forces with the organizers. In 1947 he became one of the illegal immigrants aboard the ship Exodus 1947[2], initially as a passenger and later as a crew member. Shortly after he arrived in Mandatory Palestine, the 1947-48 Civil War in Mandatory Palestine started, and he joined the Haganah[3] as a volunteer. In the 1948 Arab-Israeli War he took part in Operation Danny[4], then was included in the “French commando” squad and finally became a soldier of the Negev Brigade and fought in the South. His dream was now a reality: he was a member of the new State of Israel, established just 3 years after the horrors of the Holocaust he managed to survive…

After the end of Israel’s War of Independence, Noah Klieger resumed his journalistic career. He became a L’Équipe correspondent in Israel in 1953 and also one of the founders of the first sports section in an Israeli newspaper. From 1957 he was a staff member of the mainstream daily Yedioth Ahronoth newspaper for which he also wrote a personal column… till the age of 90! In particular, he covered the trials of genocidal Adolf Eichmann and Ivan (John) Demjanjuk held in Israel, and frequently published pieces about Holocaust survivors. He participated several times in the March of the Living, the annual international educational program dedicated to Holocaust history, sharing his own experience of survival with the new generations…

Noah was a Maccabi leader in its most accomplished expression. He took a major part in the development of Israeli sports as an executive and administrator. From 1951 to 1968 he served as the chairman of Maccabi Tel-Aviv Basketball Club, and from 1970 to 1998 as the chairman of the Maccabi Ramat-Gan Omni-Sport Club. Klieger was a member of the Maccabi World Union Executive for 14 years. He was also a major fixture in the development of European basketball, participating in FIBA‘s activities since 1951. He chaired FIBA’s media council and the Basketball Commission of Association Internationale de la Presse Sportive for over 25 years and was a press advisor to FIBA’s Secretary-General and FIBA Europe Secretary-General. 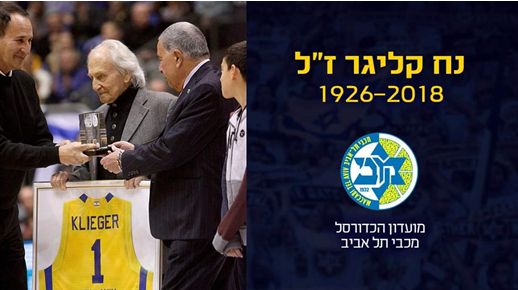 In this hour of pain and immeasurable loss, May God grant that we shall be worthy continuers of the message of life and action bequeathed to us by the murdered victims and the survivors, multiplying Jewish life everywhere through our decisive action in all the Jewish communities in the world, and in our magnificent center, the State of Israel.

During this Yom HaShoah, may God grant that we shall remember the extraordinary content, flowering creativity and productivity of the individual lives and Jewish communities so brutally uprooted.

May God always protect the State of Israel!

And may we always remember, bless, honor and perpetuate by our deeds the lives of the Six Million, for we are their Living Memorial.

[1]Death marches (Todesmärsche in German) refer to the forcible movement of prisoners by Nazi Germany toward the end of World War II and the Holocaust. The marches took place mostly between the summer/autumn of 1944 and May 1945, when hundreds of thousands of prisoners, mostly Jews, from German concentration camps near the eastern front were moved to camps inside Germany away from Allied forces.[2] The purpose of the marches was to allow the Germans to use the prisoners as slave labour, to remove evidence of crimes against humanity, and to retain control of the prisoners in case they could be used to bargain with the Allies. Already sick after months or years of violence and starvation, prisoners were marched for tens of miles in the snow to train stations; transported for days at a time without food or shelter in open freight trains; then forced to march again at the other end to the new camp. Those who lagged behind or fell were shot. The largest death march took place in January 1945. Nine days before the Soviet Red Army arrived at the Auschwitz concentration camp, the Germans marched 56,000 prisoners out of the camp toward Wodzislaw, 35 miles away, where they were put on freight trains to other camps. Around 15,000 died on the way.

[2]Exodus 1947 was a ship that carried 4,500 Jewish immigrants from France to British Mandatory Palestine on July 11, 1947. Most were Holocaust survivors who had no legal immigration certificates for Palestine. The ship was boarded by the British in international waters; three of those on board were killed and ten injured. The ship was taken to Haifa where ships were waiting to return the Jews to refugee camps in Europe.

[3] The main paramilitary organization of the Jewish Yishuv in Mandatory Palestine between 1920 and 1948, which later became the core of the Israel Defense Forces (IDF).

[4] Operation Danny’s objectives were to capture territory east of Tel Aviv and then to push inland and relieve the Jewish population and forces in Jerusalem.