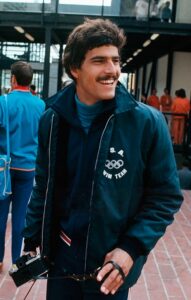 Mark Spitz is the eldest of Arnold Spitz and Lenore Smith’s three children, with American Jewish
heritage. His paternal grandparents emigrated to America from Hungary.
He made his debut at the Olympics in Mexico in 1968, started and won as a team in the 4 x 100
meter relay and the 4 x 200 meter relay. He finished second in the 100 meter butterfly stroke
and third in the 100 meter freestyle.
Four years later, he reached the peak of his career: in 1972, he won 7 Olympic gold medals in
Munich; four individually, three in teams.
Each of his times were also a world record:
100 meter freestyle: 51.22 seconds
200 m freestyle: 1:52.78 minutes
100 m butterfly: 54.27 seconds
200 m butterfly: 2:00.70 minutes
as well as in a team:
the 4 × 100 meter freestyle relay (3: 26.42 minutes)
the 4 × 200 meter freestyle relay (7: 35.78 minutes)
the 4 × 100 meter medley relay (3: 48.16 minutes)
He retired from competitive sports after the Olympics. He then worked in the film / television /
advertising industry, and also organized sports events. He then finally opened a real estate
agency in Beverly Hills.
Famous Jewish Athletes and Sports Leaders
Famous Jewish Athletes and Sports Leaders in Hungary
Every week, Maccabi VAC presents a Hungarian Jewish athlete, sports leader, or coach who
has played a key role in Hungarian and universal sports.