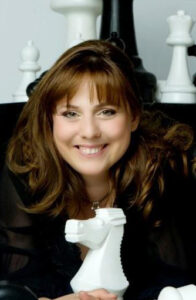 Every week, Maccabi VAC presents a Hungarian Jewish athlete, sports leader, pruner, coach, who has played a decisive role in Hungarian and universal sports.
Zsófia Polgár International Women’s Grand Chess Master, two-time Chess Olympics champion.
She achieved her first big success at the age of 5, in 1980, when she won the U11 girls’ age group in Hungary. In 1986, at the age of 11, she placed 6th at the U16 World Championships. In the same year, she won 2nd place in the boys and girls joint competition at the U14 World Championships, making her the World Girl World Champion. In 1991, she took 2nd place at the U20 Junior Boy World Championships in Matinhos.
In Fast Chess, she won the U20 Junior World Championship in 1986 in Mazatlan, Mexico. She achieved the title of Women’s International Grand Master (WGM) in 1988, and in 1990 she also earned the title of Men’s International Master. In
1989, she achieved a sensational result in Rome with a “performance rating” of around 2,900, which is still unmatched, at the age of 14. Scoring 8.5 points out of her nine games, she finished 2 points ahead of the male grandmasters.
She has won several international men’s competitions. In 1992, she won a world championship silver medal in the women’s fast chess competition, and then exceeded the men’s grandmaster norm expectation by 1.5 points.
The last Live score of her active career is 2450, with which she is in the 3rd place in the Hungarian women’s perpetual rankings. Her best place in the women’s world rankings was 6th place. Her score on the Hungarian male-female joint all time rankings was 45. The highest score was 2540, in December 1999. She has not played in a FIDE-listed tournament since 2010, so she is not counted as an active contestant. In 1988 and 1990, she was a member of the women’s team at the Chess Olympics, and in 1994, she took second place. In 1990, she won an individual gold medal with 11.5 points out of 13 games, 12.5 points out of 14 games in 1994, while at the 1996 Olympics, she scored the 3rd best result on the field with 10 points out of 14 games on Table 1.