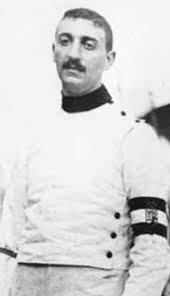 He was born in Budapest on October 23, 1883. His father, Dr. Mihály Werkner was a lawyer, his mother was Júlia Stern. He started fighting with Károly Fodor, but a few years later he was already under the tutelage of master Santelli Italo. In 1905, the fast, vigorous fencer appeared with his unusual methods and his angled cuts. His head-to-head attacks often resulted in his opponent’s defeat. He was an energetic fencer who trusted in his excellent defenses and quick reposts.

His sports career was interrupted by the outbreak of World War I.

In 1914, he took part in the founding of the Hungarian Fencing Association, of which he was later the executive vice-president for years.

In his youth, he was training to be a pianist, and graduated as an artist from the Academy of Music. However, at the request of his father, he also studied mechanical engineering, eventually becoming director of a large chemical factory for 23 years and a board member of the National Association of Industrialists.

He most likely died in 1943, as a result of an accident. He rests in the Kozma Street Cemetery.

Maccabi Haifa to Play in Berlin Stadium Built By Nazis